Leslie Feist is singing 1234 tell me that you love me more… I watched a great movie last night – The Loves of Edgar Allan Poe. No, this is not the one with John Cusack from 2012 — that was called The Raven. This is the one made in 1942 in black & white. There is this wonderful scene which depicts Poe sitting down to a fireside chat with Thomas Jefferson, a fellow writer. 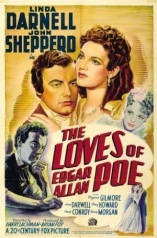 You see, Poe got into a brawl with some classmates after a poker game. Henry Morgan the actor from M*A*S*H, plays the part of his roommate at college. The president wants to see you…

So, Poe knocks on the door. There is the nameplate: Thomas Jefferson, President, University of Virginia. Sitting in a chair by the fire, is none other than the president of this new university which he founded. Curled up with a blanket, he tells Poe to sit down. Is he about to be expelled for gambling, drunkenness, and most importantly, non-payment of tuition?

Jefferson: The trouble you young men are giving me. I find it almost more difficult running a university than running a nation.

He tells Poe to pull up a chair.

Jefferson: This fantastic tale of yours – The Gold Bug you call it. It kept me awake last night. I couldn’t go to sleep until I finished it. I think you’ve hit upon something new in storytelling… (This from the man who so loved books. The year is 1826 the same year Fenimore Cooper was published and Washington Irving.) Tell me, how did you ever go about writing a tale that kept me in such a stew?

Poe: The recipe is simple Mr. Jefferson. You take three ingredients, the bizarre, the romantic, and the analytical – put them all together, shake well and there you have it – the reader stews.

I see, says Jefferson. What are your plans for the future?

Poe: I intend to be an author.

Jefferson: So, you should…

Then Jefferson goes on to ever so diplomatically show Poe the door as he is expelled from the University.

Again, I ask myself this same question. Did this fireside chat really take place?

Poe was a student at the University of Virginia from February to December, 1826. Thomas Jefferson died on July 4th, 1826 – the same day as John Adams – 50 years after the Declaration of Independence.

I sent an e-mail to Ryan Bugas, the president of The Raven Society.

I wonder if you have seen this old B&W movie from 1942 – The Loves of Edgar Allan Poe… Jefferson tells Poe to pull up a chair for a fireside chat. Do you have any knowledge if this discussion actually took place?

Thank you for your comments. To my knowledge, no discussion took place between Poe and Jefferson – it seems to be a very romanticized story, though!